A Great Cross Country Season Comes to a Close 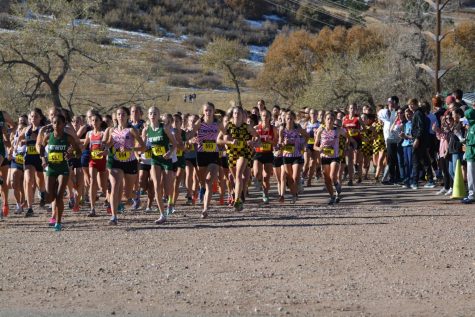 The girl’s team, led by Kasey Klocek, takes off at the 4A State Championship race.

With October coming to a close, the fall sports are nearing the end of their seasons. One of these sports is cross country. The cross country team, on both the girls and boys side, has had a very successful season.

Both JV and Varsity athletes raced hard at league on October 11 despite chilly weather and a course still soggy and snow-covered in places. The JV boys and girls teams ran a great last race, with both teams finishing third, and several individuals placing in the top 10. The varsity boys team battled it out with tough competition, earning a close third place finish as a team and many individual titles such as All-Conference and Honorable Mention. Junior Grahm Tuohy-Gaydos walked away from the race as the 4A Jeffco League Champion. The girl’s varsity, battling sickness, finished fourth, although all seven runners finished in the top 25, earning many individual titles such as All-Conference, and Honorable Mention.

The varsity teams continued on to regionals the next week, traveling all the way to Grand Junction to race for a place at state. Both teams raced their hearts out at yet another golf course. The boy’s team finished seventh in a very competitive region. Although they didn’t qualify for state, they capped off a great season with many running their fastest times all season. Junior Grahm Tuohy-Gaydos finished first in the region, with a time of 15:12, qualifying for state as an individual. The girl’s team raced their hearts out, with eight of the nine runners running their fastest times all season, and many running personal best times. As a result, the girl’s team finished third, qualifying for state as a team.

Just this past weekend, the rams finished off their season with the state championship race. Grahm Tuohy-Gaydos, who qualified as an individual, ran a smart race, placing 5th out of 157 athletes. The girl’s team, finished off their season with a great race, finishing 10th as a team. Although they didn’t qualify themselves, many of the boy’s varsity team traveled to Colorado Springs to support their teammates.

Now that the season is over, the Racin’ Rams are ready to move on to whatever is next, whether that be a winter sport, more running, or some well deserved rest. Make sure to congratulate all of the cross country team on their great season!