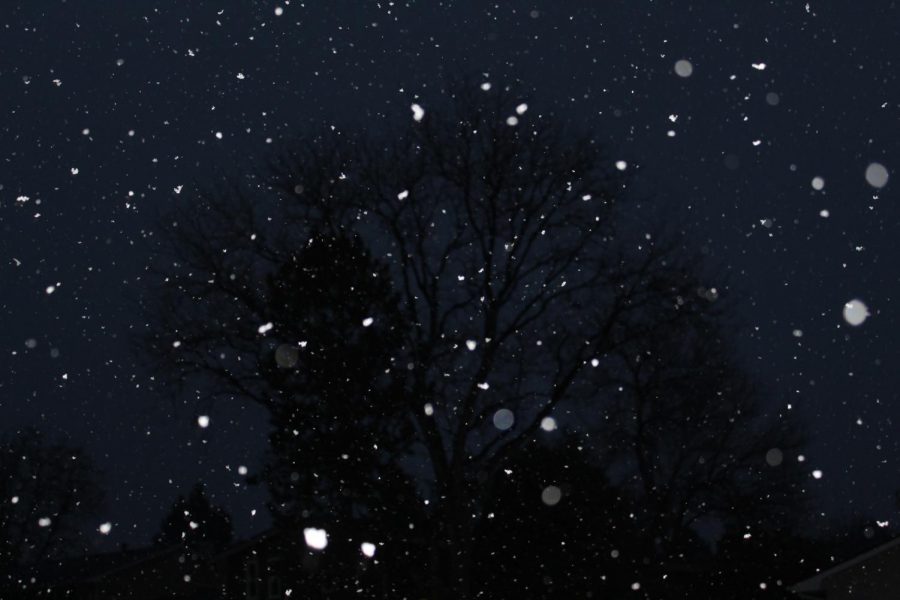 Greys and blacks swiftly change into bright, vivid colors. The cold, stone-brick walls of the manor fade into ivy-covered walls. The ivy twists into randomly placed spirals and the leaves curl in unnatural ways. Cracked tiled floors soon become overgrown with weirdly shaped plants and flowers. The ceiling is overrun with vines that curl up, some that spiral, and some that just simply hang. Everything is saturated to the point that one cannot stare at any one thing for too long. The black-haired maiden steps into the new environment warily. As soon as she steps foot into the new level the temperature drops by several degrees. Gripping her jacket tightly, the black-haired maiden continues to walk. She quickly glances at the scenery around her and takes note of the warm, yellow and orange light that hovers above her. The light is bright and seemingly warm but it isn’t warm at all, quite the opposite. The patches of ground where the light is strongest are the places that are the coldest. Compared to the rest of the manor there aren’t many windows, even if there were they’d most likely be covered by the lush vegetation. It’s not like outside is any brighter though.

Looking around the black-haired maiden takes note that there aren’t many creatures here at all. Compared to earlier there was an abundance of small, big, docile, and dangerous creatures. After walking through the threshold to this new environment the black-haired maiden is even more wary.. She side eyes every corner thinking of what could possibly have hidden itself in the depths of the shadows. The black-haired maiden walks deeper into the twisted forest. Soon the tiled floors morph into a grassy ground covered with more unnaturally shaped plants. The vines that hung loosely from the ceiling turn into a thick overgrowth, which occasionally block other pathways. The bright, warm light that hung above becomes dimmer and dimmer as the black-haired maiden travels further. She brings her jacket closer as the temperature continues to drop with each step. Her breaths soon puff out in small white clouds as shivers rack her body. At this point, she wants to turn around but she knows full well that she has to continue going forward. The black-haired maiden steels herself as she trudges forward.

Each step is like a step further into a snowstorm. The hallways are dimmed in a deep blue color with the only bright patches of color being those from the fluorescent lights emitting from some plants. The vines seem to grow thicker and curl in more as if waiting to grab unsuspecting victims. As breathtaking as the scenery is the black-haired maiden knows not to touch or look too closely at anything in this world. Those plants could very well snatch her hand or could twist her mind if she stared too long at the bright flashing lights emitting from certain plants.

“How much longer do I have to walk?” she ponders to herself.

The only thing getting her to walk more is the need to get back. The need to get back home is her drive. She walks and walks, going down a never ending path. The black-haired maiden had her eyes fixed to her shoes while trudging along the grassy path. She looked up when she noticed that the cool blue shadows turned into a warm and inviting yellow. The light comes from behind a curtain of teal vines. Biting her lip she takes the risk of going through the vegetation. To her surprise she isn’t killed when she arrives unscathed on the other side of the curtain. Before her lies a large room.

The room is expansive with a high ceiling arching above the marble tiled floors. The walls are made of pristine glass that shows the dark world outside. Soft moonlight makes its way through the glass and illuminates the room in a soft white glow. There’s a large spiral staircase opposite of where the black-haired maiden stands. At the bottom of the room is a decently sized fountain, the water glistening underneath the moonlight. The vegetation seems to stop as soon as it meets the threshold of the door she walked through. She stands on a balcony that overlooks the room. Looking closely she realizes that the warm light she saw before was due to the candles that light the rim of the balcony. Slowly she makes her way to that spiral staircase, as soon as she walks down she realizes just how high up she was. However, she could’ve sworn that she was only two floors up and yet now it seems that she was at least six floors up. The room looks even more intimidating than before. The arches seem to be reaching closer to the moon than the ceiling, the ceiling itself looks as if it’s about to meet the sky, the glass walls make the room seem more like a glass box than a large room. The marble tiles of the floor are actually in a checkerboard style, which makes the maiden think that this is a game room of some sort. After all there is never a shortage of surprises in this twisted world.

Slowly, the black-haired maiden makes her way to the fountain, which is much larger than she thought it would’ve been. She sits on the stone edge while gazing blankly at the ripples of the water. The room itself isn’t as freezing cold as the hallway was, which both relieves and worries the maiden. She fails to notice the sound of footsteps approaching her from behind as she’s too caught up in her mind. The black-haired maiden jumps out of her skin when she hears the sound of someone or something clearing its throat. Turning she sees the figure of a person but as she squints more at the figure she realizes that it may not be fully human. The figure stands proudly in front of her with a relaxed posture. It has bright blue hair, or at least seemingly blue hair as the moonlight washes out the figure quite a bit. It wears what appears to be a teal and black patterned outer layer over a simple black turtleneck and pants. The outer layer is checkered and striped layered in a way that gives it the appearance of a rare flower. Due to the odd pattern and color the jacket, or whatever it is, is quite intriguing to look at. It draws one in like a moth to flame, however, the black-haired maiden knows better than to go to said flame. The figure wears a toothy grin and a seemingly kind face. What makes the figure suspicious is the fact that it styles their soft blue hair to the side in order to cover half of their face. The black-haired maiden squints her eyes in doubt and looks away with a huff.

“I’ve heard quite a bit about you, dear Alice.” The figure draws out.

The black-haired maiden scrutinizes him for the nickname but quickly looks away and directs her focus back to the fountain. She puts up her defense as one does in a threatening situation.

“No answer,” the figure states as he sits down in front of her. “That’s fine, you can just listen. Take my words however you want, they can be the truth or they can be a lie. It’s up to you.”

He spares her a glance and she realizes that his eye, the one visible, is a bright red. He continues, “Well I do know that you want to reach the end of this, what would you call it, a maze perhaps? Whatever it is I know you want to leave. To put it simply, you can’t. You won’t ever be able to, when you leave you’ll always end up back here. When you think you’re gone, you’ll just end up being sucked in again. There really isn’t a point in thinking otherwise-”

“Says who?” the black-haired maiden abruptly states, effectively cutting the figure off.

“The ‘ruler’ of this place you could say. She runs everything that happens and she isn’t necessarily keen on having things come and go as they please.”

“Hmpf. So what? I’m going to find a way out of this place. Whether this so-called ‘ruler’ likes it or not.” she states as she stands up.

The maiden doesn’t even spare a backwards glance at the figure as she turns to leave and walks out of the room. She walks into a nearby hallway, adjacent to the towering room she was in. The figure also stands up and heaves out a dejected sigh. He looks at the maiden’s retreating figure with remorse. He too had been like her, headstrong and wanted to escape. However, he quickly realized that no matter what he couldn’t leave. The figure moves his hand and brushes his fringe out of his face revealing his second eye, which is scarred over. That half of the face is also covered in smaller scars as if someone were clawing at it. The figure smiles a remorseful, defeated smile.

“Now, now, dear Alice, there really is no point. After all, it’s useless to try to escape this twisted wonderland.”