COVID-19’s Impact on the College Board 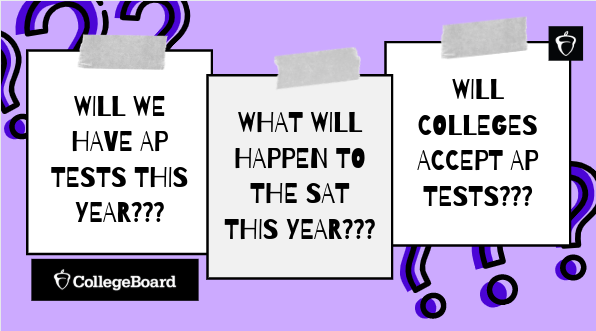 With all schools in Jefferson County closed, many members of the Green Mountain community have had  far more questions and worries than normal. most Green Mountain teachers only had a day to bring their classes in compliance with the remote learning guidelines, which were written by the district the day before. Student had no experience with the self-management skills required for virtual learning and themselves only had days as their course-loads rapidly shifted. However, slowly, everyone was able to make the shift, and classes kept on moving forward with content and students continued to learn. But there was still one question: What will happen to AP tests? Well, after leaving everyone in suspense, the College Board finally announced that this year’s AP tests will be 45-minute online free-response style tests. These tests will only include topics most AP teachers have already covered in their classes by early March. In addition, this year’s AP tests will be completely open book/open note. Students may test in one of two testing windows: May 11-22 (primary testing window) and June 1-5 (make-up testing window for students who experience any issues with technology).

While this new format may have wide appeal with educational groups and adults, it brings with it many flaws. Firstly, no one knows what these new free-response questions will look like. The College Board has not given any information on the formatting of any course’s question(s) besides that, “a question may have more parts than can be answered in the allowed time”. This factor is extremely intimidating for some students who are slow test-takers because firstly, they are confined to a 45-minute window, and then, the College Board states that it is likely students will not be able to finish. In addition, several colleges have so far remained silent on accepting AP test scores. However, the College Board is still reassuring nervous test-takers that colleges will accept their scores and that it has been noted that several previously accepting colleges are doing the same for the 2020 AP tests.

In addition to the confusion over AP tests this year, many juniors are also stressed about the scheduling of the SAT. Originally planned for April, the test was moved to June in light of the virus. Due to unforeseen events, however, June was deemed too soon to safely host the SAT, and it was further postponed to late summer. The College Board announced that beginning in August, monthly SAT days would take place until December in order to ensure that all Juniors have the opportunity to receive their scores. Despite many colleges making accommodations for the late SAT or even not requiring the class of 2021 to have an SAT score at all, this delay still causes many problems for some students, such as those who were hoping to get a start on applying to college over the summer, or whose applications are due earlier than normal. In addition to this issue, if schools do not open by the beginning of next school year, the SAT will be given online, which is a big adjustment for many students and has the potential to cause major problems for students – the scoring will be incredibly skewed and the issues that already exist within the SAT may become even more pronounced-  Potentially providing a major problem for the students caught in the crossfire as the College Board and major academic institutions battle over the contingency testing plans and the merit they hold.

This unprecedented virus has upended lives all over the globe, and it will continue to do so for the foreseeable future. In addition to changes in AP testing and the SAT, we can expect to see many more surprises as this cataclysmic event continues to develop further. It has been a period of adjustment for everyone, and through this difficult time, we have seen the adaptability of human nature shine through. We have experienced huge changes to our daily routines, and have had countless plans put on hold, and these tests are just a few of them. But we will not be defeated by this virus; instead, we will find ourselves united in our shared struggle. Because, in the end, we are one community, and no matter the actions of large organizations such as the College Board, that in itself will never change.