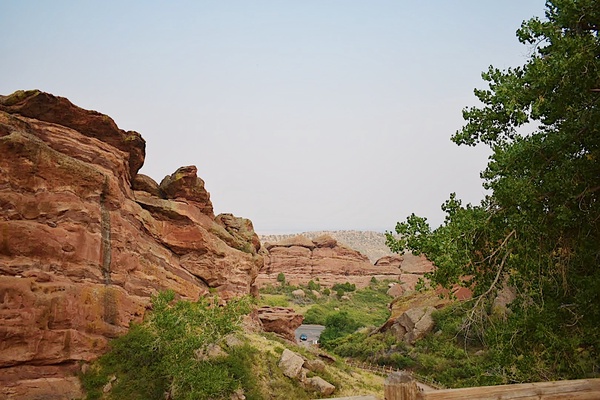 As leaves begin to change colors and the air gets colder, it becomes exceedingly clear that autumn is upon us. Halloween, the primary and most anticipated event of the season, will not look the same as in previous years as more people are urged to stay inside and avoid large gatherings. While the city of Los Angeles recommends citizens not participate in trick-or-treating, there has yet to be an official recommendation from Colorado. Although traditional ways of celebrating Halloween, like haunted houses, corn mazes, and pumpkin patches are being canceled or changed in order to fit public health concerns, there are still places you can go to experience something spooky and scary, and many of them are right in our backyard.

Jefferson County is the home of many historic locations with a rich, and often violent past, and it comes as no surprise to believers in the paranormal that these places may also be home to spirits. Best known for its amazing geographical location and concerts, Red Rocks Park and Amphitheater is a popular destination for people new to Colorado, but many claim it is an area haunted by the Hatchet Lady of Red Rocks, an apparition of a headless woman carrying a hatchet. According to America’s Haunted Roadtrip, “One of the trails at Red Rocks leads to an old graveyard where people think the woman may be buried. People have been known to stay in the graveyard at night to try to hear or see her.” There are many theories behind who the headless woman is, with some claiming that she was murdered in the area. Whether or not there is any historical evidence to corroborate the legend of the Hatchet Lady, Red Rocks is still a perfect place for those interested in the paranormal to visit or research.

Located on top of Lookout Mountain in Golden, Colorado, the Buffalo Bill Museum and Grave is the resting place of American soldier and huntsman, William “Buffalo Bill” Cody. The famous buffalo-hunter and creator of the Wild West show is buried with his wife and is claimed to haunt his own museum and burial site. According to Kaitlyn Lamb, author of Ghosthunting Colorado, “People have reported seeing Bill in the gift shop of the museum and seeing things flying off the shelves or moving.” Buffalo Bill is not the only resident ghost of the museum and grave, as it is rumored that a tourist fell to her death while visiting and is reportedly seen walking along the mountainside. The presence of Buffalo Bill’s and the tourist’s spirits have yet to be proven, but the Buffalo Bill Museum and Grave remains a spooky location with a rich and vivid history.

The Brook Forest Inn located near Evergreen, Colorado, opened in 1919 and is listed on the National Register of Historical Places. In its over one hundred year history, the Brook Forest Inn has seen its share of tragedies and is reportedly home to multiple ghosts. The first ghost is Carl the Stable Hand, who in 1943, murdered his lover, a chambermaid named Jessica, and then took his own life. Two children are rumored to have died on the property, one of them a little boy who died from influenza, and the other a little girl who was hit by a carriage, are said to run around the halls of the inn. According to Larry Hotz, All Denver Real Estate Executive Editor, “We were awakened in the middle of the night by what sounded liked a child running down the hall very fast. It was 3:30 am and I went to the door to see what happened. No one was there.” Guests have reported seeing apparitions and hearing giggling and voices with no apparent source. Whether or not the reports of ghosts at the Brook Forest Inn are true, it still has an interesting and violent past, which is perfect for the spooky and scary feeling that is expected of Halloween.

As Halloween approaches and the COVID-19 pandemic continues, traditional ways of celebrating may be deemed unsafe or unable to happen this year, but that does not mean there aren’t other ways to acknowledge the holiday. Reading about haunted places or taking a socially-distanced ghost tour are two of the many ways you can celebrate without putting your health at risk, and you don’t have to travel far. There are countless scary and spooky locations within Jefferson County that will give you goosebumps and the eerie yet fun feeling that people seek while celebrating Halloween.