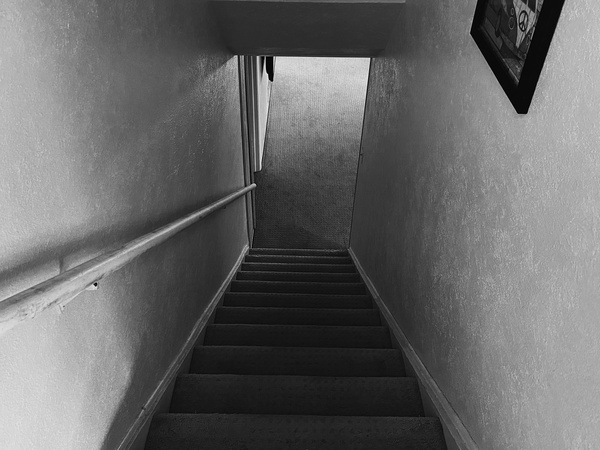 One moment Zeke was driving along the road in the pitch black night. The next, he was almost swerving off of the road. He was trying to get home as soon as he could to see his wife and children and for the past ten miles there had only been trees. The vast trees stretch for miles in all directions, which made sense since he was driving on a side road in the mountains.

The only problem was that his drowsiness was starting to affect his driving. If he kept this up, he might drive off the road and die. Not to mention the fact that there wasn’t enough room on the side of the road to pull off and just sleep. Zeke was in a bind.

As if hearing his thoughts, Zeke found himself driving towards an open space where a house was brightly lit up like a christmas tree. Zeke smiled brightly as he pulled the car into the open area in front of the house.

He staggered up the porch stairs and knocked on the large mahogany door. Not a second later, the door swung open to reveal an older man in his late sixties. He wore small glasses and a maroon robe. The man also had a kind smile on his face.

“What brings you here, son? It’s the middle of the night.” The man asked softly, the smile never leaving.

“I’m sorry to be knocking on your door so late at night, but I would it possible if I could stay for the night to rest. I’ll be sure to leave first thing in the morning.” Zeke begged.

“Of course of course. Come in, son.” The man moved to the side allowing Zeke to hesitantly walk in.

“I can’t thank you enough for your generosity.” Zeke said.

“It’s quite alright. I’m not straining myself and you look like a pretty decent person. But, I do have to warn you about something. No matter what, do not go in the basement.”

Zeke couldn’t sleep. No matter how exhausted he was and how previously he was almost falling asleep on the road, his eyes refused to close. He just kept thinking about the basement and what could be in there. Why would the man even mention it? It was like he was asking Zeke to go in there.

Zeke couldn’t take it. His curiosity is getting the better of him. He got out of the guest bed on the second floor and walked down the flight of stairs, making sure to avoid the floorboards that creaked loudly.

He stood in front of the wooden door that led to the basement for five minutes, battling with himself over whether he should listen to the man and ignore the mystery behind the door or if he should open it up and just peek inside. Despite trying to be a good person who listens, he reached towards the brass door knob.

Slowly, Zeke pulled open the creaking door to reveal light wooden stairs that led down into darkness. He held his right hand up to the side and found the lightswitch. It wasn’t much, but the few dim light bulbs that lit up were enough for Zeke to see each step.

The more stairs he descended, the more Zeke’s heart began racing. What could be down there that would cause the man to warn him not to enter? Would he die if he found out? Many nerve wracking questions were racing through his mind, but Zeke didn’t pay too much attention to them as his desire to find out was too overpowering.

When he reached the concrete floor he glanced up, only to freeze in place. The dim lights provided more than enough light to see the entire basement, but it was odd that the room was empty except for one large object; it was a giant life-sized stuffed gorilla with its arms poised above its head like it was about to attack the thing in front of it.

As Zeke crept closer to the stuffed gorilla, he saw a sign hanging from its neck that read, “Do Not Touch”. Once again, curiosity took over Zeke’s mind. Why would the gorilla be the only thing down there and why would the man tell him not to go down there in the first place? Slowly and tentatively, Zeke reached out and poked the fur of the gorilla’s left arm.

All of a sudden, the gorilla roared to life, almost deafening Zeke in the process. Without even thinking, he bolted up the stairs and slammed the basement door behind him, turning the lock on the door.

His breath of relief was taken too soon, though, as the cracking and snapping sounds of the door being ripped off its hinges reached Zeke’s ears. He then made a mad dash to the front door, slamming that one as well, and running to his car. The amount of adrenaline coursing through him was more than enough to keep him awake for the rest of the drive.

Right as he got to his car, Zeke heard the front door cracking and breaking just like the basement door as the gorilla ripped it off its hinges. He quickly fumbled in his pocket for his keys, but the amount of shaking his hands were doing prevented him from properly gripping the small metal object.

As soon as Zeke got the keys out of his pocket, his clumsy fingers dropped in on the ground. Behind him, he could hear the loud stomping of the gorilla getting louder as it got closer.

At that moment, Zeke gave up. He had accepted the fact that he wouldn’t see his family again. Zeke turned around and stared straight up into the gorilla’s eyes, embracing his demise. He watched as the gorilla reached his right arm out and he closed his eyes.

Strangely, he only felt a poke on his left arm. He opened his eyes once again to peer straight at the gorilla, who wore what looked to be a grin.

“Tag. You’re it.” It said before running back into the house.